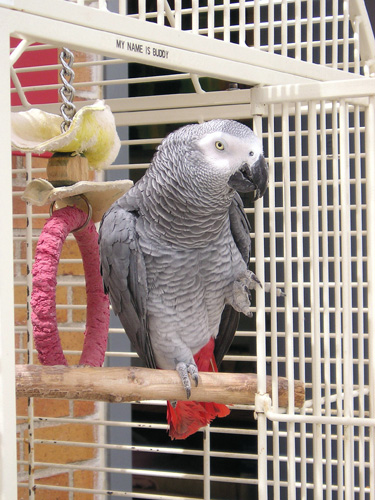 Buddy is a bird.  He’s a male African Grey parrot, commonly called the Red-tailed Grey, which is the larger parrot subspecies. Buddy is about 10 inches tall and 4-5 pounds.  He is the average size of a wild African Grey parrot.  These parrots are grey with a red tail feathers and kind of dark feathers on their back.  They have four claws on their feet. They fly away if afraid.  Buddy shakes or may bite if you threaten it.  Buddy has many toys to keep him happy.  He climbs and hangs upside down. Wild African grey parrots eat vegetables and fruits and drink water.  Buddy eats carrots, oranges, melon, apples, bananas and even snacks on pizza crust.  And drinks water.

African Greys live in the dense jungle habitats in Africa.  Places like near the equator and in the Ivory Coast countries.  Some of the countries are Ghana, Congo, Nigeria, and Zaire.  They roost in groups in the trees.  African Greys find holes in tree trunks. They use their beak to make their hole bigger.  Only one pair of parrots lives in one tree usually.  They lay 3-4 eggs.  It is hard to tell a boy from a girl even when they are adults.

Early humans used the feathers for headdresses and ate the bird and the population became less.  Now people are one of the worst threats today.  People sell them and they are destroying the dense forest jungles too.  The Vulture eagles want the same food as the African Grey parrots.  Vulture eagles chase away the Grey parrots.  Food can be harder to get then.

Most African Grey parrots as pets don’t learn to talk until they are 11 months old or older.  Buddy will say, when he wants to, things like, “ Buddy, mmm pizza, I love you, night-night, help I can’t get out, can I come out, hello Buddy, apple please, what-cha doing, you’re my friend, Mary, Sit down Justin, copies Mr. Koppelman’s voice, changes voices, rings like a telephone, mimics the male cockatiel’s and lovebirds voices and talks to Cinnamon or Raki the female cockatiels and he sings like the Hartz Mountain Canaries. ”

He can say over 85 words.   His vocabulary grows all the time.  I learned that Buddy could talk.  That was really cool.