The 5th grade students learn about classification of animals.  (“King Philip cried out, “For goodness sake!”)  We use the BELL to study invertebrate animals and do research paper on the inhabitants of the lab.  The student’s reports can be found on the BELL special animal of the week icon.  They are also published in the local newspaper, The Blissfield Advance.  Investigations such as the cockroach pull, Royal Rodent Race, worm reactions to smells and others will be done in the BELL.  Check out the icons under the BELL Lab for other neat activitie!  One of the investigations in 5th is the Wiggly Worm Investigation.  Students see which smells a worm will react to.  Mrs. Hojancki's class writes about their investigation. Following is a picture of a student making a notebook about the investigation. 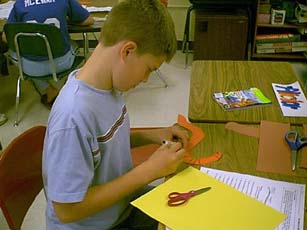